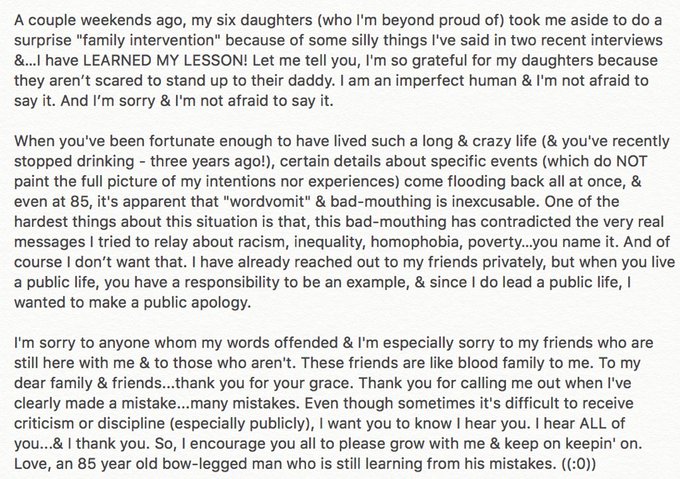 Quincy Jones recently made headlines for essentially “spilling the beans” during his recent interviews. Mainly his Q&A with Vulture, where discussed a plethora of topics from Micheal Jackson’s surgeries to Richard Pryor’s sexual preferences. Now the music legend has come forward with an apology. According to a statement he released via Twitter, Jones had a family intervention with his daughters to discuss his “word vomit.”

He admits that he had a “long and crazy life” and that he also stopped drinking about three years ago. He went on to say that at 85-years of age, all of his memories came back at once.

Part of the statement reads: I’m sorry to anyone whom my words offended & I am especially sorry to my friends who are still here and to those who aren’t”. Jones says that he apologized privately to certain people (and their families) but wanted to issue a public apology.

Dee Beasley is the founder and Editor-in-Chief of FreshAsFrankie.com. After starting out as a musician-producer he went on to study the music business and work in Urban Promotions, followed by artist management. Mr. Beasley entrepreneurial spirit has led him to launch numerous businesses in music and fashion marketing. He’s a huge fan of the ’80s and ’90s Hip Hop and R&B, and he’s a firm believer that Hip Hop Music will never die.

This site uses Akismet to reduce spam. Learn how your comment data is processed.

Breaking new ground in the evolution of Hip-Hop/R&B!